While Wednesday's contest between Park of Cottage Grove and Stillwater may have been a rematch of last year's Class 4A State title game, there were a number of unfamiliar faces in both lineups.

Fohrman allowed just four hits and two runs, only one of which was earned, to help the Wolfpack, ranked No. 1 in the Class 4A coaches’ poll, earn the Suburban East Conference win.

The junior righthander pitched in relief in last year's state title game, but this year she said she is trying to accept a greater leadership role for the Wolfpack (7-1, 4-1).

Fohrman walked the first batter she faced and had to pitch out of a two-on, one-out jam in that opening inning. Then in the third inning, Stillwater loaded the bases with two outs, then scored two runs on an infield hit and an error.

"I couldn't figure out what was going on with my grip — my hands were super waxy from using a new ball," Fohrman said. "But I settled in enough, and then I figured out I needed to use some chalk to improve my grip."

Fohrman got the final out in the third and did not allow another baserunner, retiring the final 13 batters she faced.

"She started figuring things out and doing better things with her riseball and curveball," Park coach Bob Loshek said of Fohrman. "She's such a competitor; when she competes, everyone follows suit." 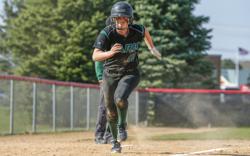 Fohrman finished with 10 strikeouts and two walks — one intentional — in the complete-game win. Seven of those whiffs came against the final 13 batters she faced.

"I figured out I needed to be less passive," Fohrman said. "I needed to be aggressive and just 'deal.' I couldn't let them score any more runs any more."